Hope you’ve all been enjoying this sunny spell we’ve been having, the sun has most definitely been good for the soul with all of what is happening around us. I guess I have to start this week with the hugely disappointing announcement from the government that swimming pools and health clubs wont be allowed to open yet, but pretty much everything else will be. This makes no sense whatsoever. At a time when our priority should be looking after people’s mental & physical health as much as possible they decide to prioritise pubs before this. For me it’s just another example of this government’s diabolical approach to leadership and it really does infuriate me.

When we look at scenes like we saw at Bournemouth beach the other day I can’t help but think that a stupid as some people have been, the blame lies with the government for it’s inability to put in place clear guidance. Scenes like this could so easily have been avoided. What is clear is that if you give enough people rope they will well and truly hang themselves with it. And as for expecting people to use common sense? Well we know that really isn’t that common these days.

Leadership skills are what define us as coaches and we are constantly looking at ways in which we can improve these skills. So when we see it done badly there is nothing more frustrating. I think NBA Basketball Coach – Gregg Popovich summed it best when he said:

I recently listened to legendary All Black rugby player/ coach – Sir John Kirwan’s brilliant interview on the Podcast ‘Don’t tell me the score – BBC radio 4’ .On it he talked about “exceptional times requiring exceptional leadership”. I couldn’t help feel very envious when he mentioned those words because he was talking about his Prime Minister- Jacinda Ardern and her response the virus. The response was immediate and clear and the results speak for themselves. Yes it’s a small far away country with a unique set of circumstances but it’s the clear decisive leadership that really stands out.

This podcast with Sir John is largely focussed on his battles with mental health during his time as one of the best rugby players in the world. He has also been honoured with a knighthood for his services to mental health. What impressed me most was how this big tough rugby player was able to show his vulnerable side. Whether you think you have good or poor mental health this podcast is worth a listen because all of us some key take homes to help us look after our own mental health. The tips are simple yet brilliant at the same time and all of us can benefit in some way by improving ours. Never has this been more important.

When I look back over the past few months one thing I have enjoyed so much as a coach has been my ongoing dialogue and communication with my athletes through this time. There has no doubt it has helped me as much as them to be speaking with each other regularly each week. We’ve talked about everything from their current mental state, what they are cooking & eating, the state of world affairs, all things training & racing and most importantly what everyone is watching on TV. These conversations have been invaluable in helping us through these times because there is nothing like a good chinwag to release the pressure. The world certainly seems like a better place once you’ve truly connected with someone.

What is clear is there have been highs and lows for everyone. So opening up and talking things through is so important right now. Talking helps you find a way through the dark clouds and it also releases feel good endorphins. There is no better medicine. It’s also more than OK to feel vulnerable – we all do. Just don’t lock it away because there is no greater strength than being able to show yours. Share how you are feeling with someone else because you might be surprised at how much better you feel when you do.

Hopefully it wont be too much longer before the pools and health clubs open again. I have it on good authority that the government are actually visiting them this week, which will be a positive step in the right direction. One thing you can do in the meantime is to sign the Swim England petition to get open pools quickly.

So for now stay busy and keep getting in that open water because if there is one enormous positive to take from all of this is that many of have taken your open water swimming confidence/ability to a whole new level. Amen to that.

Yes you read that correctly! Our first athlete racing since lockdown began (WHOOP WHOOP). It might not have been a triathlon but it was still a 27km run in the wilds of Sweden to get excited about.  I’ll let Elvira tell you all about it so get ready for serious race FOMO…

After almost driving 1000kms north from Stockholm, the typical Swedish flat countryside of forest, rivers and lakes had changed to the mountains and glacier lakes more typical of Norway.

The last couple of kilometres were a sure sign of what was to be experienced, and it was absolutely stunning and almost unbelievable to see – clear blue sky, rolling mountains with snow patches, meltwater lakes, and that noise deafening silence where you can hear everything.

The race started at the car park at the finish area (called Guoledis) which was near the border village of Vuoggatjålme, about 20km from the Norwegian border.  It was an ideal race of this time; with only 26 participants.

The first highlight was to be taken by helicopter to the start line which took about 10 minutes – the flight headed north over the mountain ranges, chequered white, brown and blue with snow, land, running meltwater streams and lakes.  And so lucky with the weather; glorious sunshine and around 20 degrees. And then from the rock ‘start’ line, we started ‘running’ – and I used that word very loosely as clearly (for me at least!) treadmill running does not translate to trail running.
The trail we followed was part of the Kungsleden (King’s Trail) – the world famous 440km trail that runs from Abisko to Hemavan and passes through passes through four national parks: Abisko, Stora Sjöfallet, Sarek and Pieljekaise.

The trail itself was consistently changing and you never quite knew what was around the corner.  At my fastest speed, the trail was flat and only consisted of dirt/mud and about two feet (as in, your own two feet) wide.  More adventurous and requiring greater concentration, was when the trail was full of rocks, large patches and water and low-lying alpine bushes and flowers.

The most adventurous parts of the trail involved crossing meltwater streams and large snow fields.  For the most part, the snow was that slushy-type that sometimes did still have a hard crust and hold your weight…or sometimes it didn’t…which meant you suddenly found yourself knee deep in snow, or face planting – which did happen.  This picture show quite a small stream and by this time, I was definitely getting the hang of it.

Crossing the streams that were fast flowing with the meltwater was also part of the trail.  At these places, it was better to cross through the stream as opposed to walking on the snow that still sometimes covered the stream; as because the snow was melting you couldn’t be certain the snow would take your weight over the water.   There were also parts on the trail where you could see the cracks starting to appear in the snow…..apparently two weeks ago the race organisers checked the entire track on a snow mobile…..!

At my slowest speed (i.e. at standpoint), you just had to stop and take in the view that would open as you either turned a corner or reached a highpoint.  It was really just so overwhelming with the contrasts between snow and sky, mountains and water.  I don’t know how many times I said it was ‘just stunning’.

And then just to complete the experience even further, a reindeer herd passed through just as we rounded the corner from the mountainside where we ran.  From concentrating on the path and feet placement, to looking up and seeing them just wander by, it was impeccable timing, and very beautiful to see in their natural environment.

Just an amazing experience and the most picturesque run I would say I’ve ever completed.

And for those that are interested:
Water:  There were two water stops, but you can drink the water straight from the streams
Shoes: Salomon Spikecross – complete with metal spikes, they can handle everything, ice, snow, water, etc and where absolutely perfect in both wet and dry conditions.
Interested in the area?

The Test: A new era for Australia’s team

I can’t quite believe that I stumbled on this recently as I hadn’t heard anything about it. Even if you are not a cricket lover you will love this documentary series. I’d put it right up there with The Last Dance for so many reasons.

For many years Australia has been the best team in the world when it comes to cricket. The team has always been the pride of the nation. Then a few years ago they were embroiled in one of the biggest scandals to hit Australian sport when 3 of their best players were caught up in a ball tampering scandal. The players were labelled as cheats and all 3 of them were banned from playing for a year (including their Captain). It was a national outrage that prompted their Prime Minister to speak out publicly to say how disgusted he was at their behaviour.

The Test is a no holds barred fly on the wall documentary about how they took on the challenge of rebuilding a new team that could once again be the source of inspiration & pride of a nation. 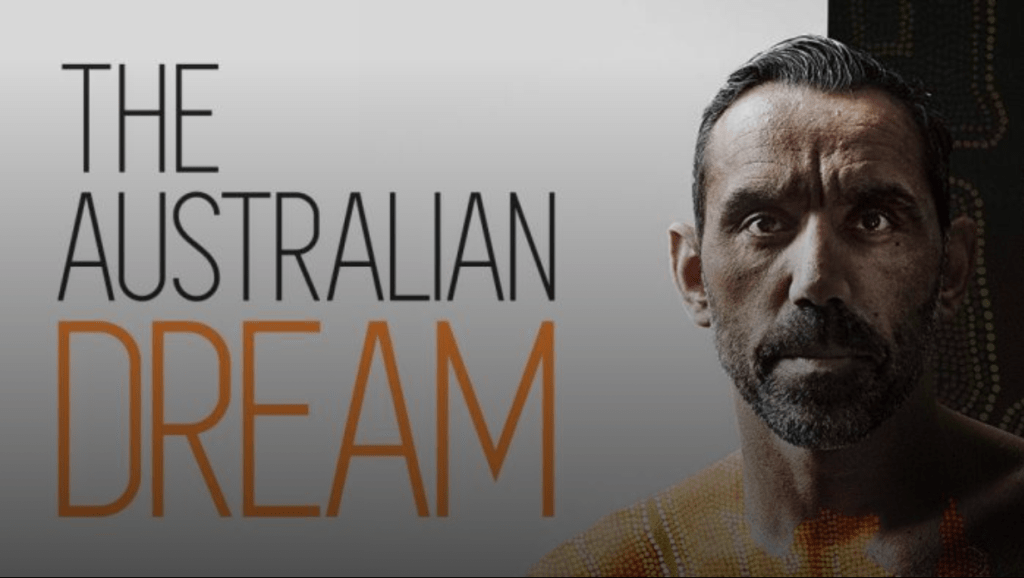 The Australian Dream: Take a stand against racism

Bit of an Aussie theme this month with the selection of this incredibly powerful film about race, identity & belonging. This film charts the life and career of one of Australia’s best ever Aussie rules football players Adam Goodes and the racism he experienced during his that time. A gifted player who at the peak of his career was prepared to fight back against it. A particularly poignant film for the times that we are living through right now and it sends out a message that racism in anyway shape or form is completely unacceptable. In another life you would have been a..?

Who is your athletic alter ego?

I would invite James Brown, Lyn Collins & Michel Legrand, so we could have a wonderful evening talking about music and hopefully convince Michel Legrand to compose for James & Lyn.

3 top tips for staying sane at home during the virus lockdown ? 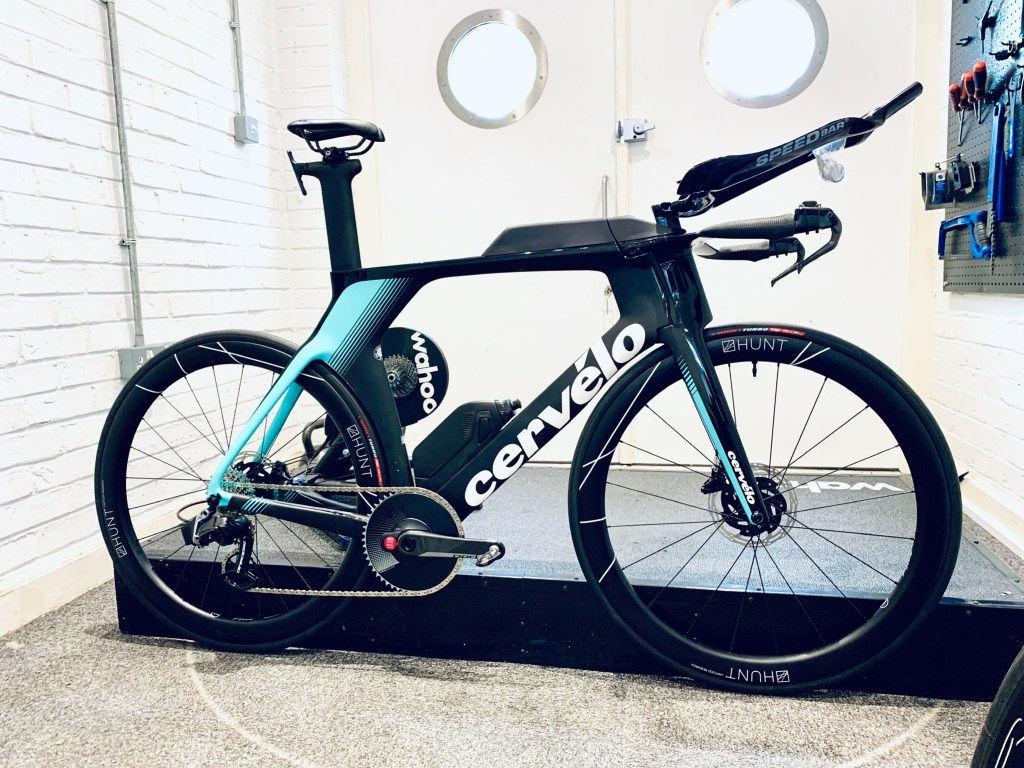 New bike for Andy & boy was he excited…she’s a beauty! Only one thing left to do and that’s name her… You’re meant to swim in the open water MB not drink it! I really must make these turbo sessions more challenging 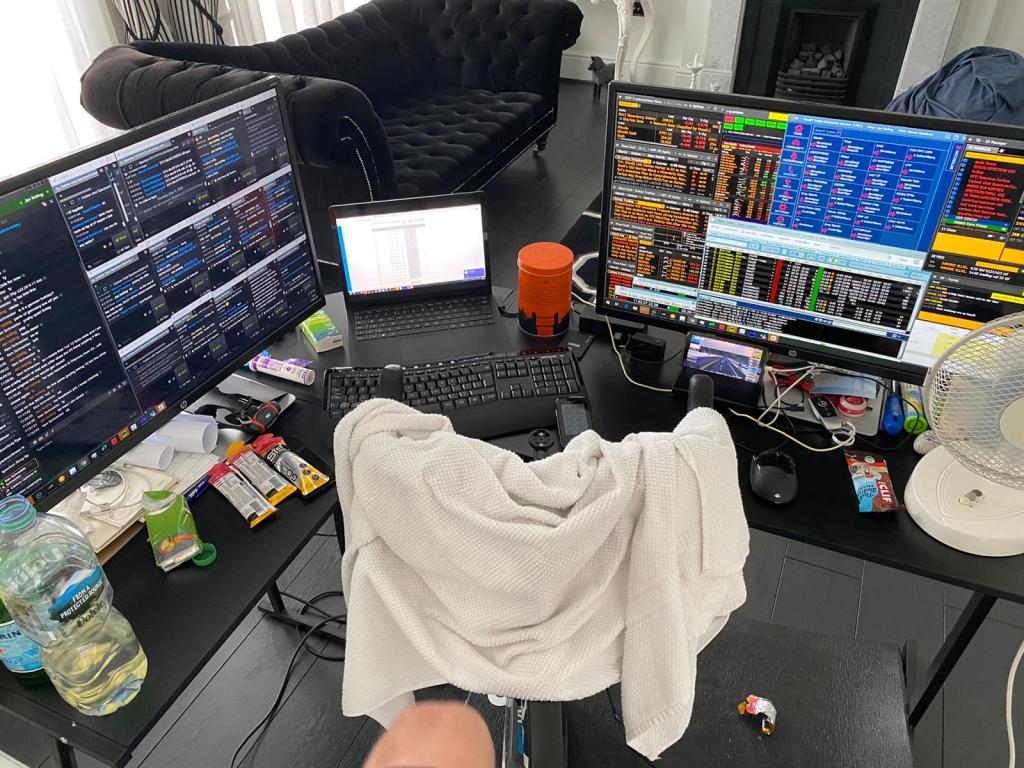 Clearly you can never have enough screens whilst turboing 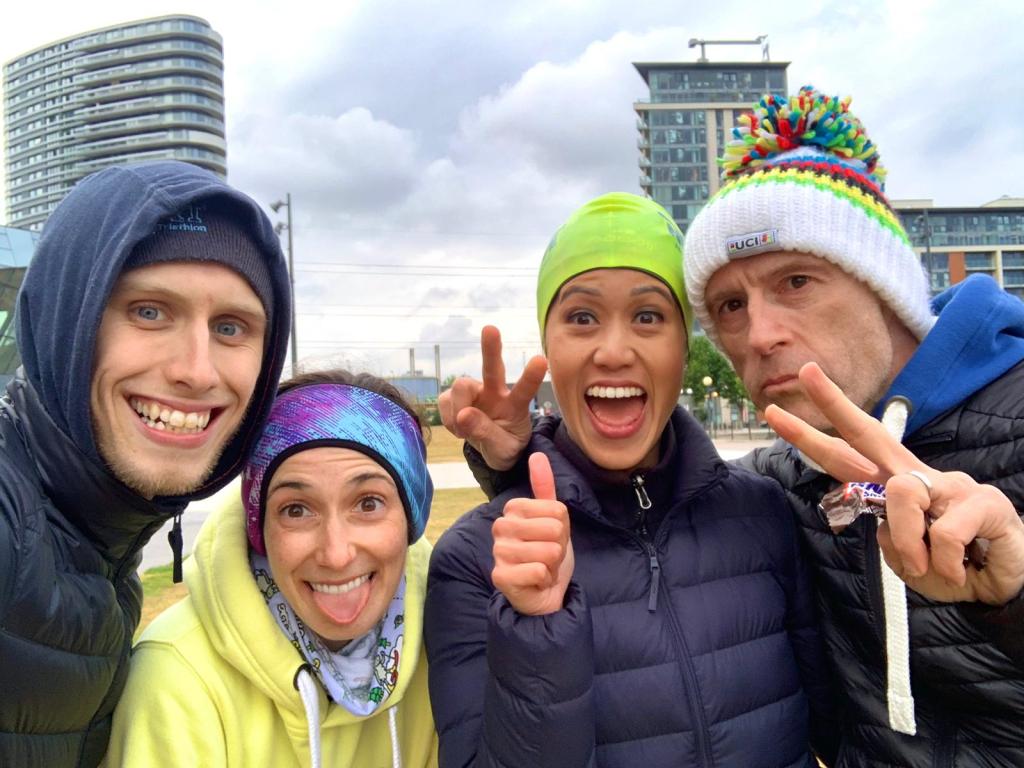 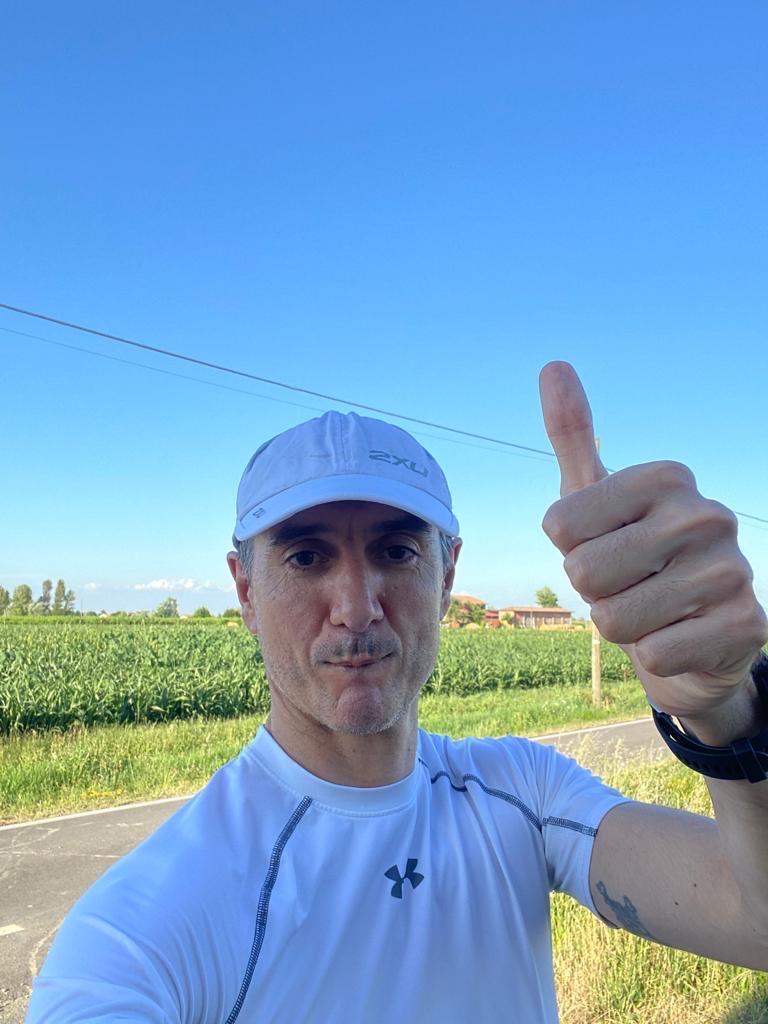 Running the roads of his home town in Modena, Italy. 32 degrees at 9pm! The Coopsters looking super cool in their new Zone 3 wetsuits (even Suzy is smiling!) 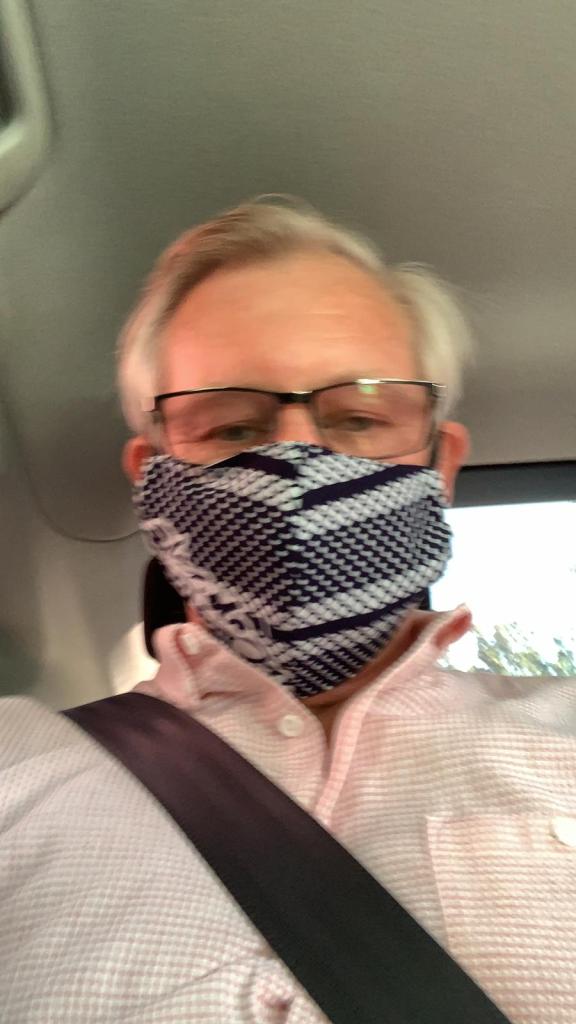 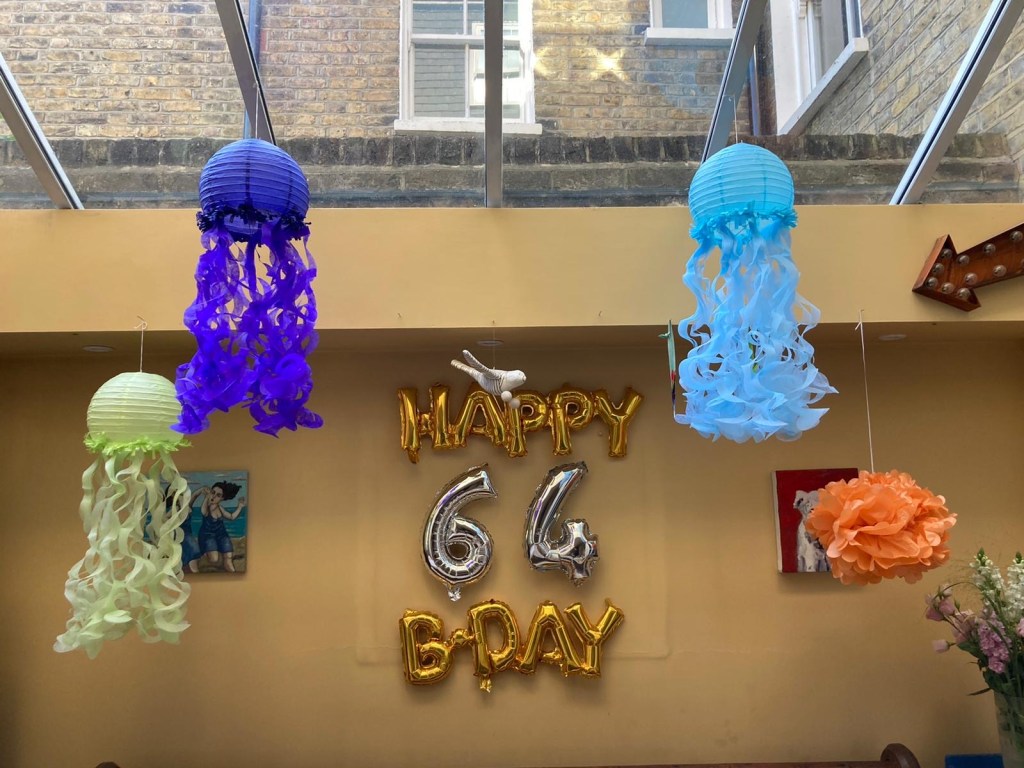 Happy Birthday indeed to our very own Superwoman/mermaid – Bev Lockspeiser 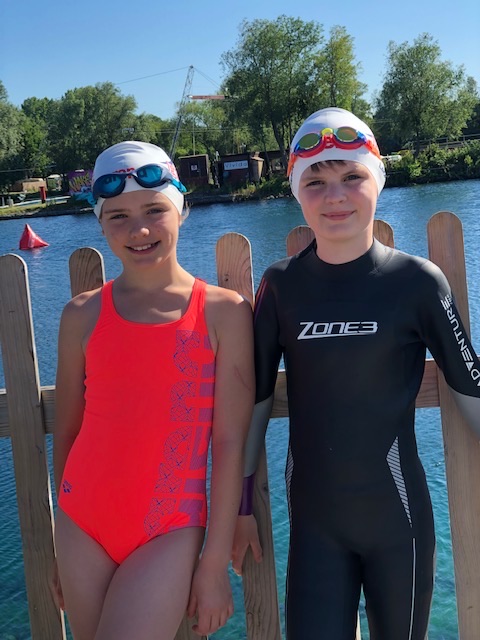 Always awesome to see the kiddies getting involved in open water swimming – 2 Prem’s to watch for the future! 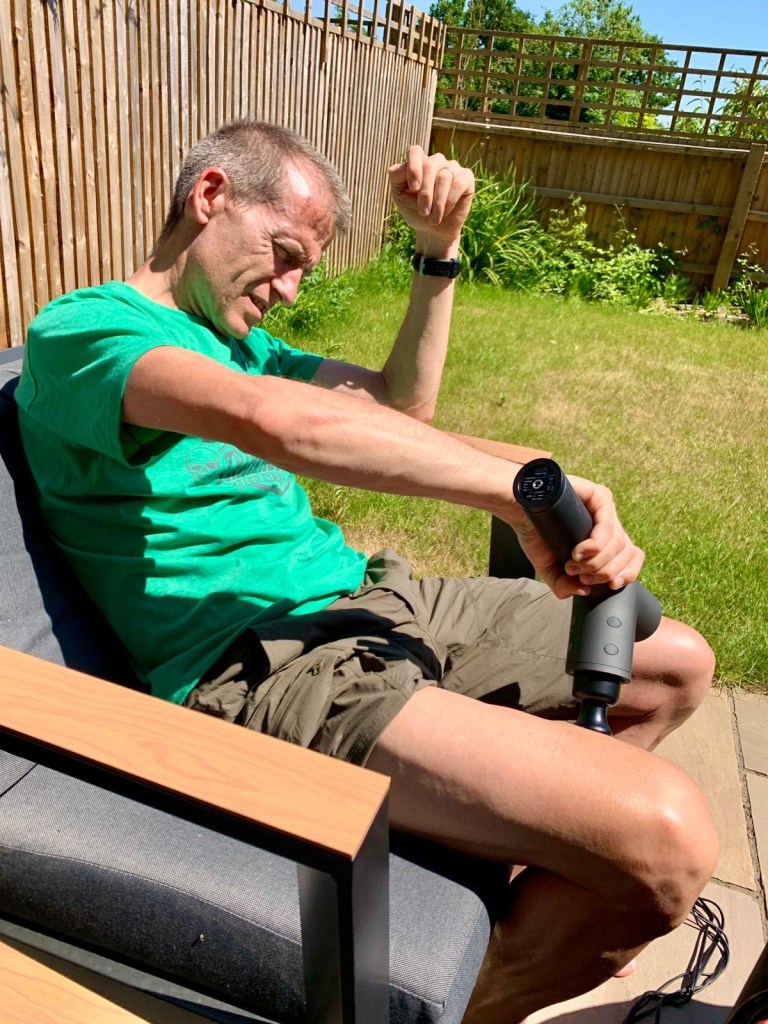