It’s been a crazy, rewarding, exhausting September with our athletes racing all over the world. There have been some terrific performances so well done to all of you. This was all topped off by 5 of our athletes competing at the triathlon World Championships for the very first time.

The famous 5 consisted of Tash Jackson, Andy Rogerson & Paul Pulze at the 70.3 World Championships in Chattanooga, USA  & Jo Irwin & Helen Burton racing for Team GB at the triathlon World Championships Grand Final in Rotterdam. All 5 of these athletes had targeted qualification as their main goal for 2017, so no matter what happened out there they had all done brilliantly to just get there. 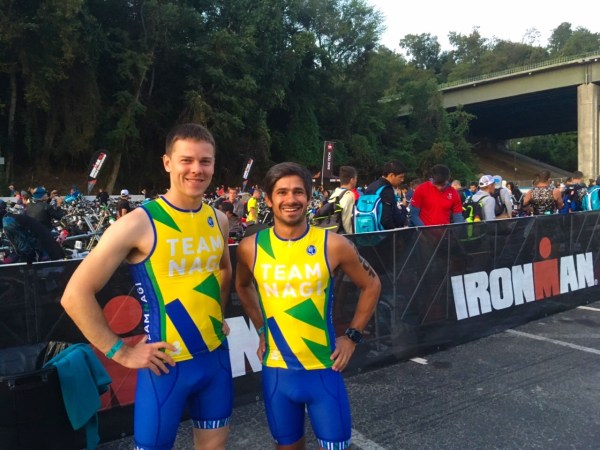 To say they had their ups and downs leading into this race and during it would be an understatement. As much as I can write articles like ‘Its just another race‘ to help my athletes there is nothing like experiencing it all first hand. It’s safe to say they have all come back much the wiser.

When an athlete races at this level for the first time the emphasis should always be placed on having fun, taking it all in and a having a great all round race experience. It should also be a celebration of hard work and commitment, which brings together family, friends and loved ones. Never forget that these people have had to put up with your obsessions for the last year or so! They so deserve this mini holiday.

What I love about these championships races is the galvanising affect it can have on the athlete. It can ignite a burning flame inside of them because they’ve finally proved to themselves they can race at this level. Most come back with a renewed sense of confidence and inner self-belief.  For many it’s the start of a new journey that can leads onto bigger and better things if they can learn and grow from their experiences.

I’m hugely proud of the way all these athletes performed, some had great races and some were left disappointed because it didn’t quite come together. But that’s racing for you; rarely do the stars ever align fully on that one-day where you want to be at your very best. This is what keeps pulling us back in for more.

It’s also important to get the next phase of training right and that includes taking a good amount of rest. If you’ve had a long race season you have to let the fitness slide, it’s certainly not a time to think you can maintain this level of fitness ongoing. Now is a time to sit back, reflect and have some fun doing the things that you have missed out on because you’ve been so consumed with training for so long. Seeing family and friends should be a priority, you should also eat drink and be merry. Rest assured the novelty factor from this will only last a few weeks before you get bored. You will then sense the motivation starting to return, at this point you can start think about building again for next year.

Enjoy your ‘unstructured’ down time for now, it’s healthy for the mind, body and soul.

Experiences like these are also terrific learning opportunities for everyone. Especially those who wish to follow a similar path.  All 5 have kindly answered 4 key questions about their race experiences below. I hope you can all learn and takeaway something from it. 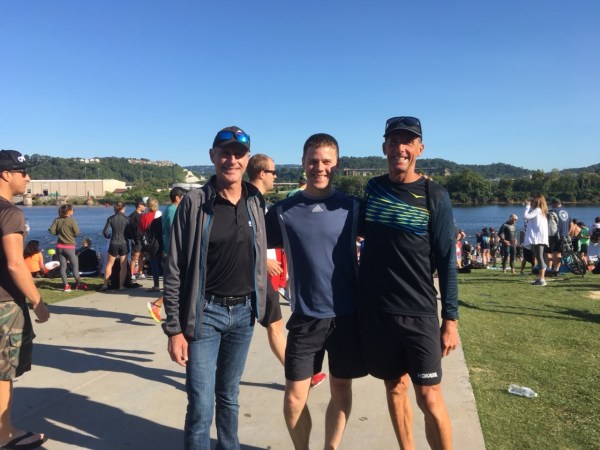 Best physical performance yet – smooth and strong, and built through the race, with only a couple of small hiccups.

I’d like to add a little more risk next time – maybe push the bike and the early part of the run just a fraction more. Nothing crazy but just a little more – to see what I can do.

Great atmosphere, great food, and most of all great teammates to share the experience with.

Without hesitation, top tip is to enjoy it. We do this for fun! And you have nothing to lose by staying in a relaxed and lighthearted frame of mind – it makes you faster!

– Tash Jackson (30-34)  5:13:34 (33:43 swim / 2:52:55 bike /1:41:19 run)
Not quite as I’d hoped! I went in with a really clear race strategy, which excited me and left me feeling much less nervous knowing exactly what I was going to set out to do. I had a really great swim where I felt strong from start to finish and felt I’d worked well with the conditions to swim to my best ability. I was feeling much more confident about my biking ability after coming on leaps and bounds in training this year, and having rode a recce of the course I knew I was going to enjoy tackling the hills on the course. I rode the bike course exactly to plan with a conservative effort up all of the hills in the first half and a stronger effort back where the course was all but flat. I came off the bike feeling the best I’ve felt since I can remember at this stage in a race, and hoped this was going to pay off on the run. Unfortunately my run just didn’t come together on the day, and this is where I was planning on making up the most time. I just didn’t seem to have any momentum and needed much more of a drive behind me to dominate a hilly run course. I’m proud that I kept my head together throughout though, and absolutely loved the race experience. Being out there amongst the worlds best girls was an amazing feeling, and it’s left me hungry to get myself back there next year and fight knowing I’ve got much more to give!

I’m not sure there’s much I could have done differently on the day. I’ve learnt a lot about what my body can handle over the year though, so if I could replay the season again I would have tried to manage my fatigue levels a bit better to put me in a stronger place for the race. When you start training in the UK Autumn it’s such a long season through to the World Champs races. Getting to the start line as fresh as I can be is something I need to work on for next time.

Being out on the bike on those awesomely smooth wide roads! Also having a women’s only race was incredible, and something I really hope Ironman continue in the future. There was so much more space out on the course, and so much more support from the male competitors on the day too! It was also great to then be out there cheering for the men the next day! 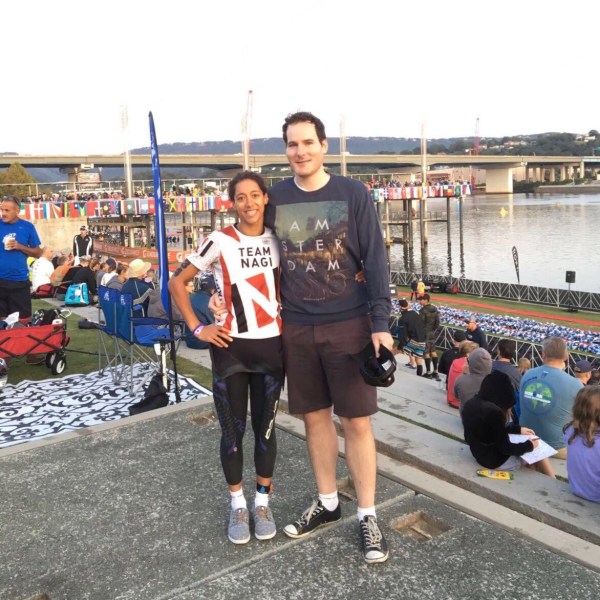 Not exactly how I had hoped! The worst bit was probably my chain coming off and getting jammed at the start of the hill which led to some bloody fingers and an unintended 15 minute break. While I had done some hill training back in the UK, I don’t think I did enough steep gradient work and so I found myself not running up as many as the hills as I should have done.

I don’t think there is much I could do about the technical problem and I feel that I had a pretty good bike once I had warmed up again. On the run which was the hilliest race I have done, I think I would try and prepare with some much hillier hill training leading up to the race.

It was all an incredible experience! I think it has to be coming down the finisher funnel at the end of the race and seeing all the supports lining the course. I thought Ironman UK had been the best experience before but this was so much better.

Don’t get stressed by all the disc wheels and exotic bicycles in transition. Focus on your own race and don’t feel like you need to try and keep up at the start, you’ll catch more people than you expect later on. 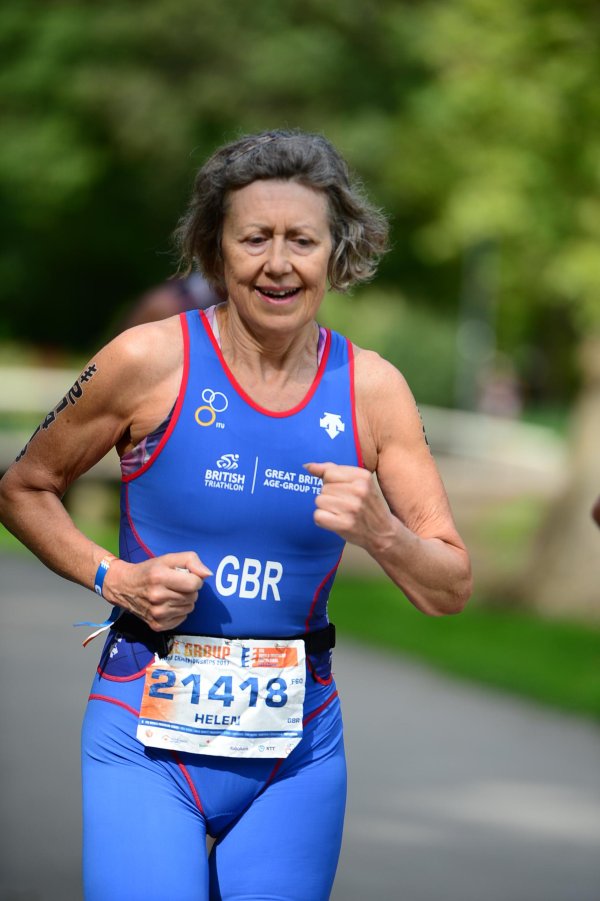 The water was cold but otherwise the swim was much as any other, however, the buoys seemed small compared to some races so I switched my sightings onto the buildings behind instead.  The bike course was termed “technical” which worried me but this just meant there were a lot of sharp corners, which, in truth, were great fun.  The run went through a pretty park but try as I might I just couldn’t pick up the pace although I did manage to muster a sprint finish.

I’m used to minimal holiday packing, taking just hand luggage, but for such an event I would take a bigger suitcase and pack a greater variety of clothes so I could cope with all weathers in the days leading up to the race including a change of trainers.

I would try not to get overwhelmed by the large numbers attending the GB Race Briefing – it almost reduced me to tears.  I was glad to get out, remind myself of Coaches words “it’s Just Another Race” and refocus.

This was my first experience of a split transition, which resulted in a 2½ hr wait from set up to wave start – if that happens again I won’t drink so much black coffee!

As I came out to the start pens the sun was shining and with that I realized I was going to enjoy this race whatever the outcome.

Sorry, got two:
·       buy the bananas and healthy foodstuffs as soon as you get there – it flies off the shelves so quickly!
·       have a go at dismantling and building your bike beforehand (pedals are tricky things!) 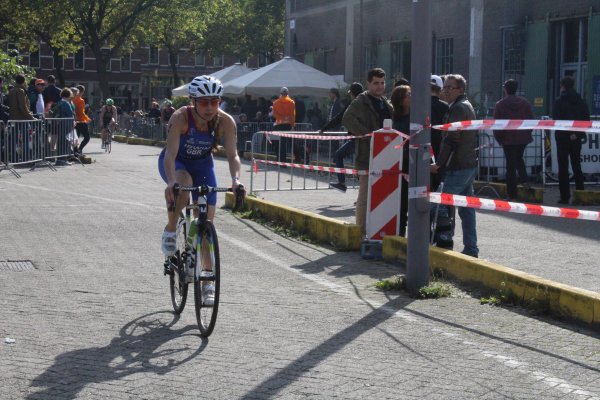 I had a disappointing race as I hadn’t quite shifted the virus that I’d picked up two weeks previously and my asthma started to play up minutes into the swim. I struggled with my breathing for much of the race and I was unable to push as hard as I know I am capable of.  However, I was pleased to finish given the circumstances and proud to achieve my first AG finishers medal.

I would try not to berate myself for having a bad race – some situations are out of my control.
I think I would try to be a bit more pragmatic about the event in general and not become too overwhelmed by it.

My best memory is of my kids jogging alongside me as I ran along the blue carpet into the finish.
Also, the camaraderie from fellow teammates and the support of the crowd on the day was fantastic.

I would pass on one of Coach Julian’s favourites – It’s just another race! 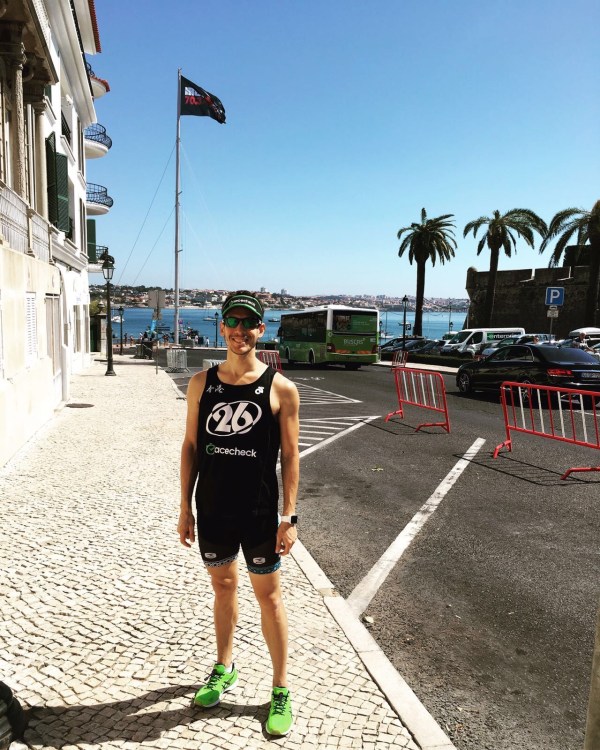 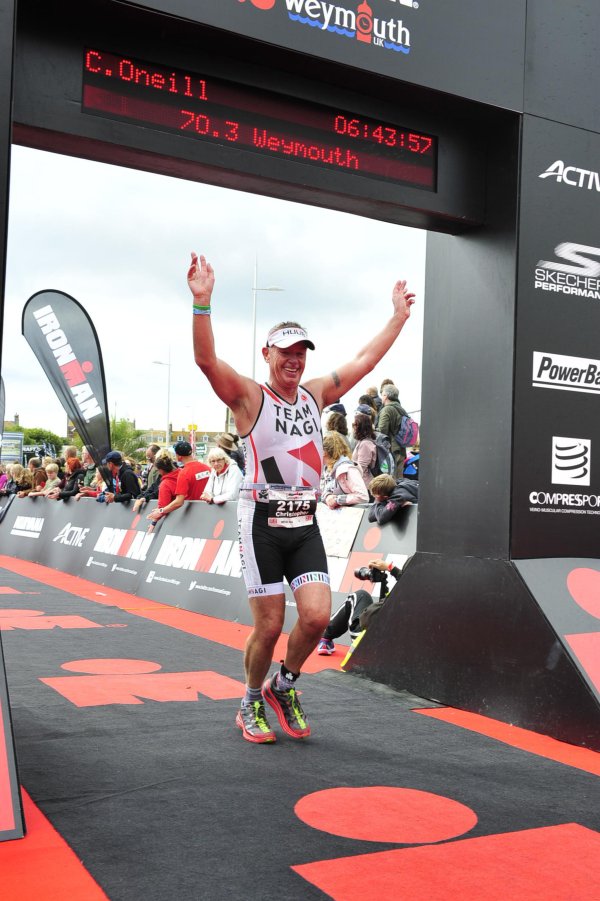 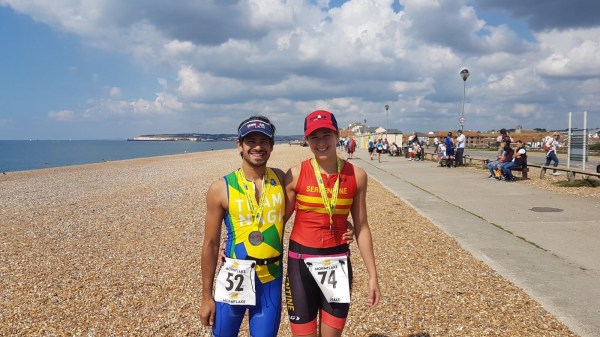 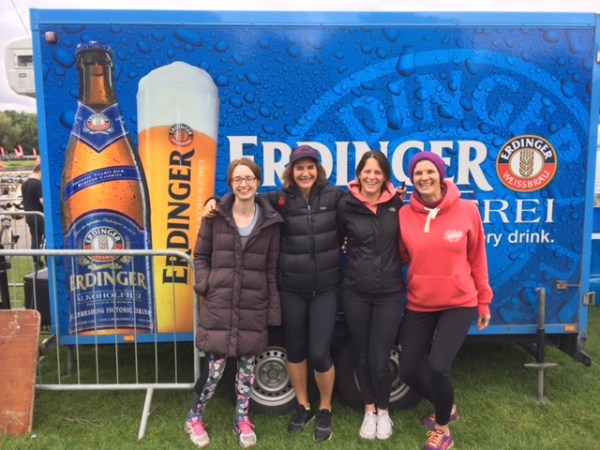 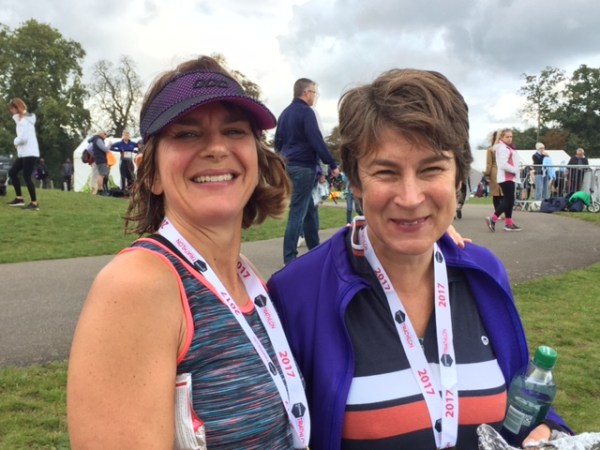 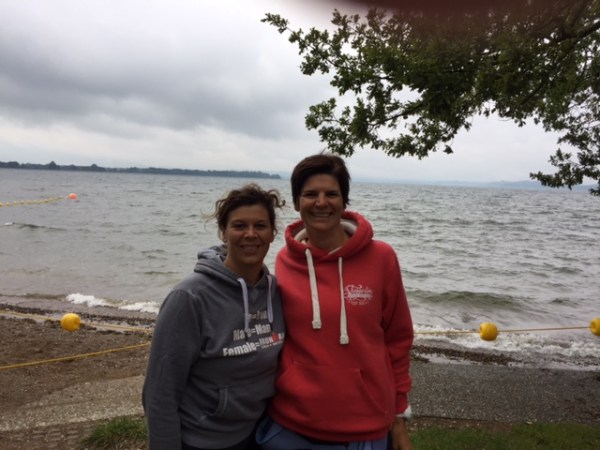