Hi Guys, I’m hugely excited to be writing what will be the first of many Team Nagi Newsletters moving forwards. Its time for Team Nagi to grow and to evolve so that I keep adding value to your coaching experience with me. I want that journey to be both fun, exciting and rewarding for everyone involved.

Its never been more important for me to help develop a sense of community among my athletes so that you take inspiration from each other. This is an extremely powerful tool, because as much as triathlon is an individual sport, when you get out there on race day I want you all to feel part of something that is much greater. I want my athletes to have a sense of belonging so they feel supported and inspired by those around them.

I have many things planned for you all over the next 12 months. You will now start to receive a monthly newsletter that will keep you informed of what all your team mates are doing around the globe. It will highlight Team Nagi athlete race performances and athlete profiles. It will also contain articles on hot topics of the moment and any other ongoing developments in the triathlon world that are relevant at the time.

There will be weekly blogs and articles written by me on a wide range of subjects. This will help give you a window into my world as a coach and what I see on a daily basis, both the good and the bad. Think of it as a learning tool to help cut through much of the misinformation that is currently spewed out in the triathlon media on a daily basis. This will be honest “real world” coaching information that will hopefully help you become better informed triathletes.

The content will evolve as time progresses so please feel free to email me if you have any ideas for content or topics. I really hope you find value in what’s coming.

Even though its very early season March proved to be a terrific month for Team Nagi racing. This is my favourite time of year when my athletes start to blow off the racing cobwebs. The results will be coming in thick and fast from this point onwards so watch this space.

First up was our Australian dark horse Emily Loughnan who put in an outstanding performance at Ironman New Zealand. This was the race we targeted to get an early Kona slot. Its been a tough time for Lougher’s this past 8 months because her training has been curtailed by a hugely problematic hip injury. Its been difficult to diagnose and just as difficult to treat. With only 6 weeks to go I think Emily still had huge doubts as to whether she would be racing. To keep her sane during this period we had to get creative with the training plan and take it week by week. This involved a big swim and bike focus and a new stability strength programme that seemed to do the trick.

With only 6 weeks to go she was only running 3 x per week for 60mins at an easy pace, much less before this period. We then added a 4th run when the injury started to subside. With only 2 weeks to go I got the message that said,  “Coach my run fitness is back”, game on. 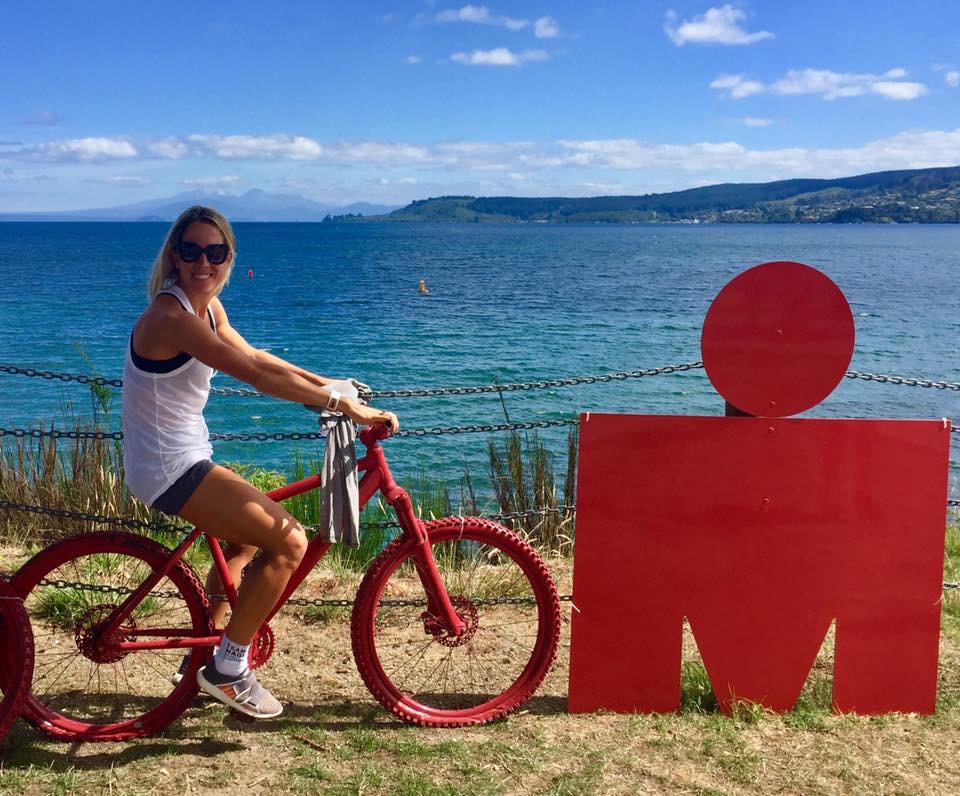 Emily managed to post a lightning fast 9hrs 56mins to win the 25-29 category and also finish as the fastest female age grouper. This also placed her 6th female overall including the pro’s with the 4th fastest marathon split of the day ( 3hrs 15mins), she was also 5th fastest overall swimmer and 10th fastest biker of the day. A truly brilliant performance and a richly deserved Kona ticket to the Hawaiian Ironman World Championships in October. 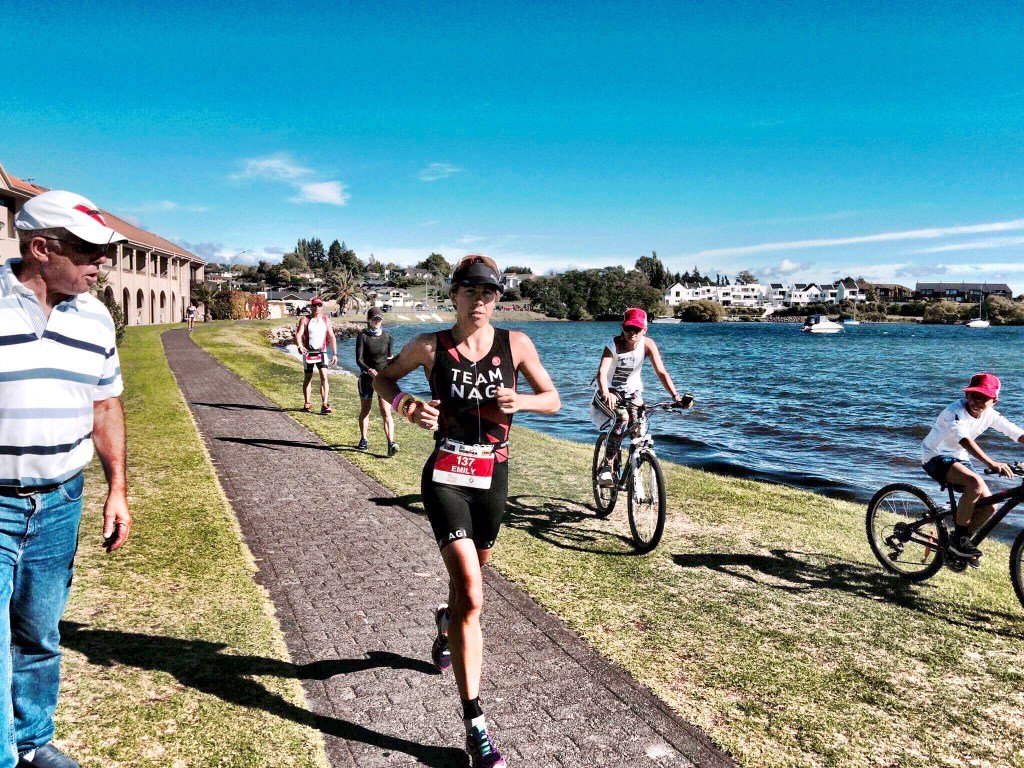 Next up was Tash ( The Flash ) Jackson at the very hilly Berkhamstead half marathon. Tash lived up to her name by posting a new PB of 1:28 placing 4th female overall. A superb effort considering she did a bike time trial the day before. Tash has had an awesome start to the season  winning the Windsor inter duathlon by a full 8 minutes to finish first female overall. She then back this up a few weeks later with another age group win and second female overall at the Asbridge Standard distance duathlon. 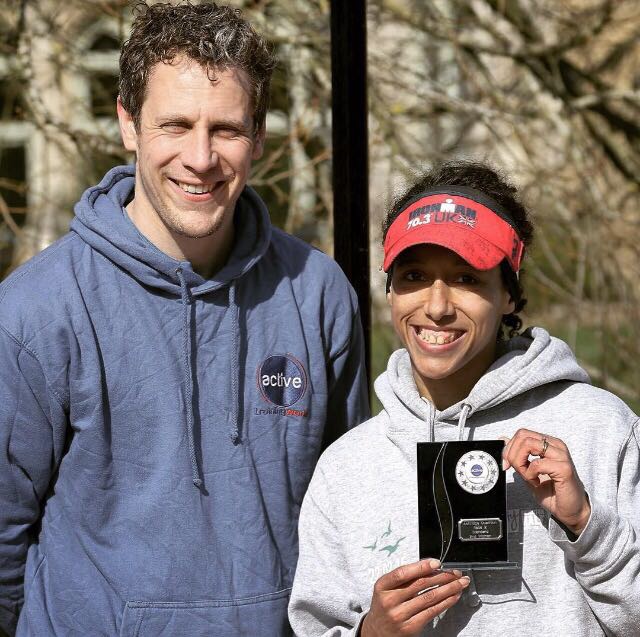 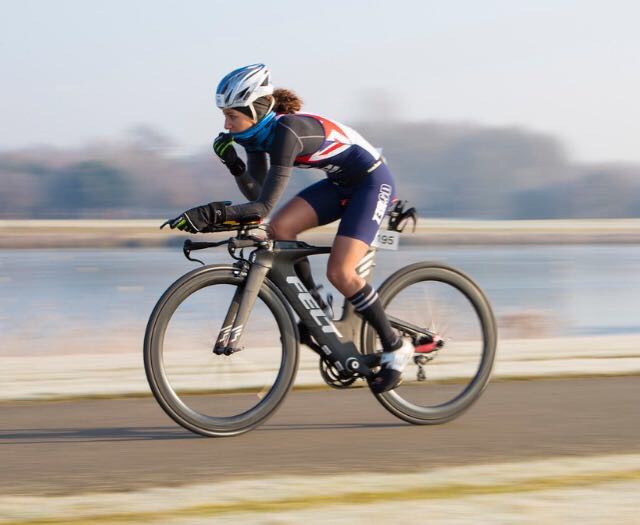 Huge congratulations to Jerome Jones who who smashed his PB by 9.5 minutes at the Clumber standard distance duathlon. JJ managed a beautiful negative split final run to book himself a place on the GB duathlon team for 2018. Looks like those Friday night special turbos are starting to pay off!

I also wanted to give another big shout out to our Team Nagi male athletes who raced so well at the  Dubai 70.3 back in January. Two terrific performances from Adam Bailey  ( 25-29 cat ) who finished 6th in his age group posting 4hrs 23 mins and Andy Rogerson ( 30- 34 cat ) 4:27:50 placing 18th. Here they are below doing some triathlon celebrity spotting: 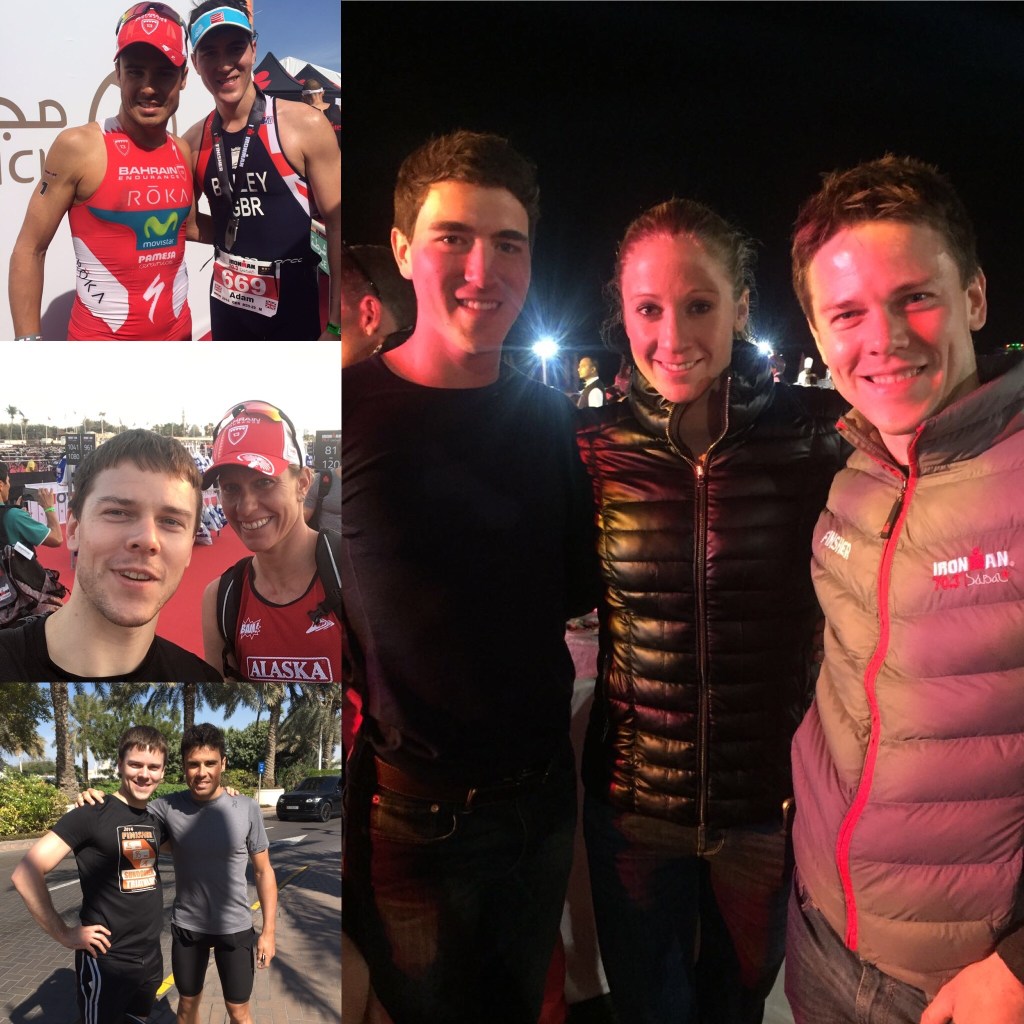 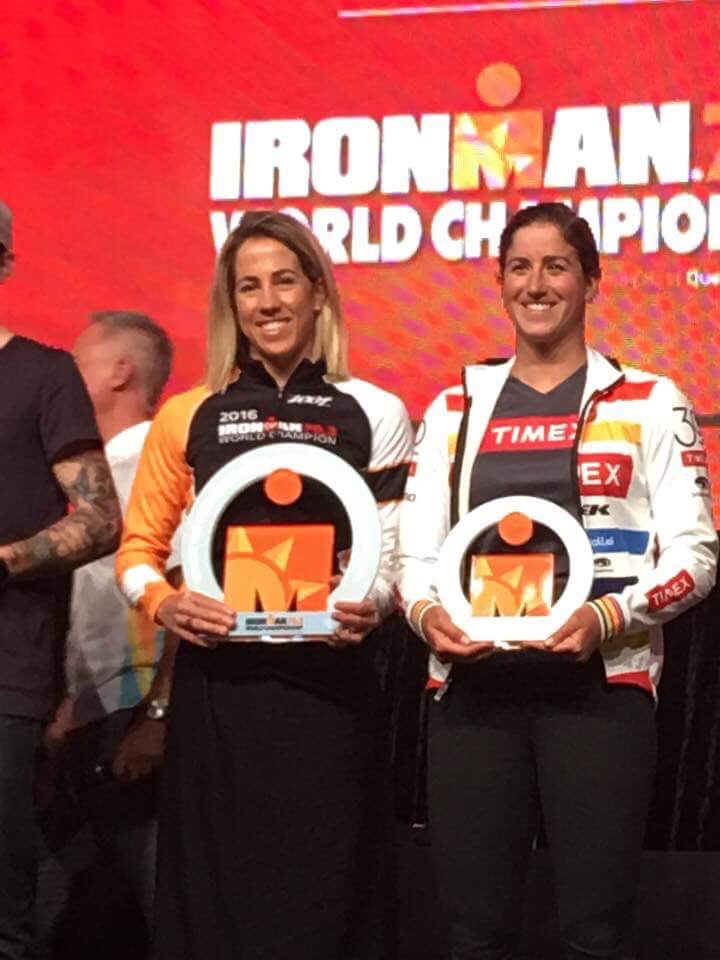 A good long aerobic bike or run on the weekend when I can really get out and enjoy the training without the constraints of work.

Anything that involves sitting on the turbo, at a ridiculously early hour of the day, doing intervals for more than two hours.  Probably not helped by the fact I self enforce a complete music/TV/video ban leaving just me, my thoughts and my bike.

I tend to find the distraction of listening to music really helps me mentally get through a tough session. Given we can’t race and listen to music, I don’t allow myself to train with music. Singing out loud is a common coping mechanism for me mid race. I was belting out some Des’ Ree “You Gotta Be” during Ironman NZ. Always a favourite.

On a stunning summer’s night in Perth you simply can’t beat a run along the coast from Leighton Beach to Swanbourne in Perth, WA. Perfection.

How was your training build up to Ironman NZ ?

My training build up to NZ was a bit shaky.  It was testing at times but overall it was fairly consistent and I drew most of my confidence from that consistency.  In this sport I have learnt that rarely is there a perfect build up…and in fact, rarely is there a perfect race.  So perhaps one way of recognising how well we have trained for an event is acknowledging how well we have dealt with certain setbacks or positively managed aspects of our training given undesirable circumstances such as injury.

What were your race goals ?

Each time I race, irrespective of the outcome, I simply want to walk away feeling hugely proud of my effort knowing I gave it my all.  My ultimate goal was to throw a little more at Ironman NZ. I didn’t want to be too conservative in my approach. I wanted to push the bike a little harder and rather than fear the run distance I wanted to embrace it knowing that if I paced it correctly early on, I would get stronger and stronger the longer I went.  In terms of results, I was desperate for another sub 10hour finish, I was hungry for a Kona spot and I was pretty keen to knock off a few of the professional females.

I very much enjoyed Ironman NZ.  I felt like I was in desperate need of a good hit out and I am so pleased to have delivered a good result.  The conditions were tough. A pretty wild swim, rough as guts at the start, I found myself pretty overwhelmed and in a bit of a panicked state early on. I gradually found my own path and was able to relax into the swim. I was a little bit disappointed that the bike time doesn’t truly reflect what I feel like I am capable of but I feel like I am moving in the right direction!  I felt strong on the run and I am mostly proud of how I executed the ‘mental plan’ I had for the run. I was excited to get off the bike, not fearing the run distance but just focusing on the now.  I focused strongly on my RPE, wanting to stay relaxed and comfortable tor the first 12km or so.  As I continued I tried to push a little more and more at each turn of the three lap course.  There was minimal focus on the outcome and that overwhelming thought of running a whole marathon, but rather I was focused on the process, one aid station at a time.

A bit of R&R before the next big focus that is Kona in October. My second time to the big island and Ironman number 4…I look forward to spicing things up a bit!

Photo of the month

Last year one of my athlete’s asked me what her race plan was for the run section of the Ironman she was doing. In it’s most simple terms I said “run the first 13.1miles with your head and the second half with your heart”. The message was clear, control your pacing at the beginning and then prove to yourself how much you want it at the end. Sometimes it’s the most basic messages that can have the biggest impact. 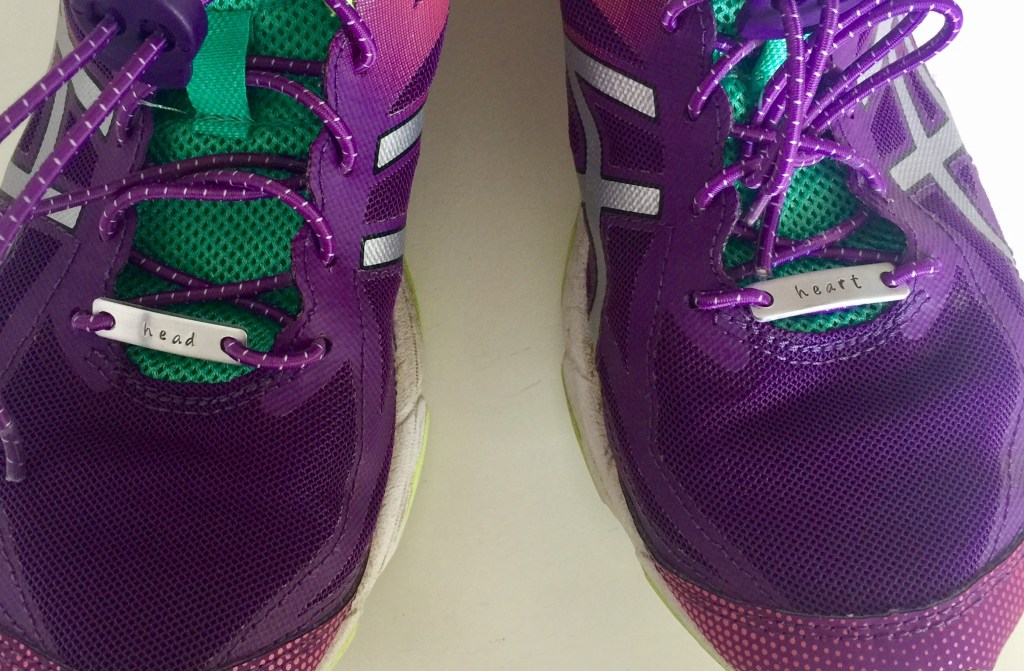